Anoint your beard with pure oils of the Holy Land of Eretz Yisrael. Planted, harvested, and pressed or distilled by Israeli farms. Every drop of oil in this bottle comes directly from the earth of Israel.

What is the story behind Aleph Male's Absolute Israel Beard Oil?

I believe in the holiness of the Land of Israel. I can feel the energy as soon as I get off the plane. I know I am a different person when I am here. It has been this way since I was a little kid. It’s why I live here. I remember when I was in elementary school in NJ, I used to watch the kids on the monkey bars and I just couldn’t do it. I didn’t have the strength inside me. Then on a visit to Tel Aviv, in an Israeli playground, I tried the monkey bars, and all of a sudden I could feel the strength in my arms to do what I could not do before. I have seen this in so many areas of my life. Eretz Yisrael, the Land of Israel, beheld always in God’s loving eyes, fills me with strength. That is why since I started Aleph Male, I really wanted to make a product that is 100% made from the Land of Israel and I am so proud it is finally here.

Each oil is sourced from a farm here in Israel:

Olive Oil - Starting from the Book of Genesis we see olive used as anointing oil. It says in Psalm 133 - “How good and pleasant it is to sit with your brothers in peace. Like goodly oil flowing down the head upon the beard.” The oil here the Torah is referring to is olive oil. Olive oil is grown here in the Land of Israel.  It is also a solid ingredient for moisturizing your beard and is good for the skin as well. The olives from this batch were grown on a farm in central Israel.

Almond Oil - Another great oil for your beard, almond oil contains magnesium which is considered to help repair beard hair. Almond oil also contains many healthy fats, proteins, and vitamin E, which are also excellent for your beard. The almond is featured in the Bible.  Moses’ staff miraculously bloomed with almonds blossoms as proof he was chosen by God to lead Israel. The almonds from this batch were grown near the southern coast of Israel.

Jojoba Oil - Jojoba oil is considered the closest in composition to the beard's natural hair oil which can often be stripped by shampoos and conditioners. Known for its natural antioxidant, moisturizing, and hypoallergenic properties, it is a powerhouse oil for grooming your beard. The jojoba nuts from this batch were grown in Israel’s Negev desert.

Argan Oil  - Referred to as ‘liquid gold’ and originally from Morocco (home to one of the oldest Jewish communities - over 1900 years ago -  in history), argan oil is another fantastic beard friend. Argan oil also contains omega fatty acids which are a great moisturizer as well as linoleic acid which helps with skin irritation and flaky skin. The argan nuts from this batch were grown in Israel’s Negev desert.

Use Aleph Male Beard Oil to:

Did you know? According to Jewish spirituality when you wear a beard, you open the gates of blessing. The beard is one of the hallmarks of Jewish sacred masculinity. Thousands of years ago the Hebrew Bible describes how the ancient Israelites would anoint priests and kings with sacred oils. In Psalm133 King David refers to the ‘goodly oil’ that ‘runs down the beard’ of the Aaron the High Priest.

Also, the Aleph (א) is the first letter of the Hebrew alphabet and symbolizes Unity and creativity. An Aleph Male is a man, a mensch, who tunes his spirit to his highest self and Aleph Male beard care is here to tune your beard to a higher level of majesty. Handmade from 100% natural ingredients including oils and beeswax from Eretz Yisrael (the Land of Israel) Aleph Male makes your beard look kingly, feel fresh and soft, and smell amazing.

My beard loves the combination of oils, taming it & making it shine. My heart loves the fact that all of those oils come from Eretz Yisrael!

It's unscented, but I enjoy the rich aroma of the four oils in the blend as I anoint my beard.

I may not wear anything else from Israel everyday, but my beard definitely does! 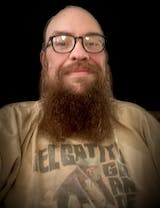 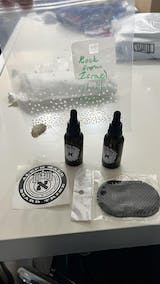 Another great product from Aleph Male.