On a trip to Israel, when I was 21 years old, I had my first religious experience. I was standing on a balcony overlooking the Western Wall (aka “The Wall”) in the Old City of Jerusalem when it happened.

At that point in my life I was not very fond of religion (I looked at religion as an irrational throwback to humanities primitive and fearful past), and I wasn’t planning on having a religious experience. In fact, moments before as I was descending the steps to the Western Wall Plaza, where the Wall is located, I said to myself, “I am going to see a really big wall, made of really big bricks, that is really old, and nothing is going to happen.” Upon entering the plaza I had decided I didn’t even want to buy into the silly “religious” tradition of going up to the Western Wall, which is why when I got there I went only to the balcony. So what came next was a surprise to me.

I had walked there with a new friend with whom I was arguing (it’s a form of Jewish bonding), and when we reached the balcony overlooking the Wall I suddenly lost my desire to speak (for me this is a big deal). I stood in silence looking at the huge stones, took in the people praying, and I sensed the presence of something that made me pause, something which I would now call “Holiness.” Then I looked down at my hands and I saw they were shaking, and I thought to myself, “Wow, this place is really affecting me.” Soon afterward I began to feel what I could only call waves of “energy” rolling off the Wall, and I felt within myself a stirring to be closer to it. So, putting aside my skepticism, I stepped off the balcony and walked down the entry ramp and up to the Wall. I saw other people leaning on it, cradling their head on their arms and pressing their faces close to the stones and I decided I would do the same. As I leaned my arm and head against the Wall, a very deep part of me woke up, a part of me that I didn’t know was there, and it said: “I am home.” Although I didn’t know at the time, I was fulfilling the collective prayers said for thousands of years by the Jewish people to come out of exile and to return to Jerusalem.

Before that night if you had asked me if I was Jewish, I would have said I am “culturally Jewish” but I am not “really Jewish.” I grew up a very unaffiliated and uninformed Jew (bacon, egg and cheese on a bagel was a favorite breakfast as a kid ), so this “inner knowing” was a surprise for me. Since then I have met many people who come to the Wall and spontaneously start crying, have powerful heart openings or other “religious” experiences. That night at the Western Wall, I heard my first call to God, to explore Judaism as a spiritual path. I ended up staying in Israel longer than planned, studying Torah in yeshiva and beginning the process of reclaiming my Jewish spiritual lineage.

I didn’t know much about Judaism when I first got to Israel, so I thought the Western Wall was just that — a wall. Then I learned it was much more. The area known as “the Wall” was just a small section of a retaining wall of a much bigger structure, which was called the Beit HaMigdash (“The Holy House” in Hebrew) but which is referred to as the “Temple.” The Temple stood on what is now called the Temple Mount and was the center of Jewish life in ancient Israel. The three major Jewish holidays of Passover, Shavuot, and Sukkot were marked by national pilgrimages to and celebrations at the Temple. According to kabbalistic sources, it was built at the spot where time and space first came into being, and it’s said that God’s presence rested in the Temples sanctuary.

The Temple was destroyed on the ninth day of the Hebrew month of Av (from the evening of July 27-28 of this year 2012). The Temple wasn’t just destroyed once but twice, both times on the ninth of Av. The last time it was destroyed was by the Romans in 70 C.E., which began the second Jewish exile from the Land of Israel. The ninth of Av, and the three weeks leading up to it is considered a time of mourning in Jewish practice. The ninth of Av also marks the Jewish expulsion from Spain in 1492, and the start of the mass deportation of the Warsaw ghetto in 1942, among other tragedies in Jewish history and is another example of the spiral-like nature of Jewish history. 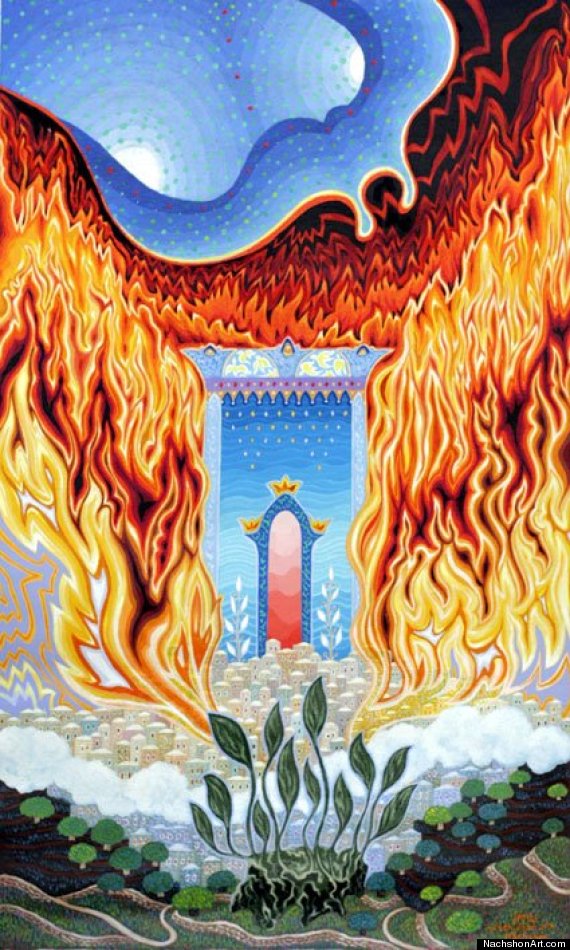 It says in the Talmud:

“Why was the first Temple destroyed? Because the three cardinal sins were rampant in society: idol worship, licentiousness, and murder ... And why then was the second Temple — wherein the society was involved in Torah, commandments and acts of kindness — destroyed? Because baseless hatred was rampant in society. This teaches that baseless hatred is equal in severity to the three cardinal sins: idol worship, licentiousness, and murder.”

Sinat Chinam is the Hebrew term for baseless hatred. It’s people hating each other for no real reason. Its that flash of hatred a person feels when someone in front of them is taking too long in line or waiting at a red light that has just turned green. It’s perfect strangers flaming each other on comment boards. It’s neighbors flinging lawsuits at each other for petty reasons, rather than loving each other as themselves. It’s what leads people who never met before to come together in animosity instead of friendship. The collective results of Sinat Chinam are devastating.

One of the most destructive ways baseless hatred manifests itself is through judging others. Many a time I have seen someone play the “what’s wrong with you” game, looking for any flaw or weakness to put another person down. Baseless hatred dehumanizes us until we lose our empathy and no longer see the “other” as people like us, who feels like us. As a result, we lose our ability to be vulnerable, to be students of life, to open our hearts and to share our weakness. Instead, people adopt defense mechanisms, wearing facades of perfection, trying to appear as if they “know” and are “in control” even when they aren’t. This armoring leaves a person feeling numb, exhausted, alienated and isolated while underneath yearning to be able to say, “I’m not perfect. I don't know. I’m doing the best I can, and I want to be loved for who I am.”

It is easy to destroy, and it is hard to build. A few cruel words from a parent can destroy a child’s self-confidence. The Twin Towers of NYC took years of sweat, intelligence, time and effort to build and were destroyed in a few tragic hours. The Holy light of human life can be extinguished in less than a second by a bullet. Every day the Jewish people pray for the time of redemption as described by the prophet Isaiah when “They will beat their swords into plowshares and their spears into pruning hooks. Nation will not take up sword against nation, nor will they train for war anymore.” It is taught that during these miraculously ideal times, the Third Temple will be rebuilt.

But praying is not enough.

The Talmud also says, “He who does not rebuild the Temple in his generation is considered as if he has destroyed it.” We have the means today, if we will it, to create a world where all human beings can live with the dignity which is their right as creations who are made in Gods image, but if we don't actively build, if we choose the easy path of accepting baseless hatred and a fallen world as a given, it is as if we have destroyed the Temple ourselves. Rav Abraham Isaac Kook taught, “If we were destroyed, and the world with us, due to baseless hatred, then we shall rebuild ourselves, and the world with us, with baseless love — ahavat chinam.”

The consciousness that is going to rebuild the Temple is one of baseless Love. Love predicated for no reason. Love that gives selflessly. Love that serves life for the sake of Love. It means seeing the good in others and building people with our words. Strengthening the lives of the people we meet, and loving our neighbor as ourselves. It means playing the “what’s right with you” game. It’s up to us to collectively create the consciousness which will rebuild the Temple and bring about a time where all the politics and divisiveness will be set aside and we will be able to come together as One.

That night in Jerusalem, I wasn’t just leaning my head against a wall, I was leaning my head against a dream. For me, the ninth of Av is a day of mourning, because the world is still so broken, and I am still so broken. So I fast and refrain from food and drink, adopt the practices of mourning and read the book of Lamenations, but it’s not a day to sink into despair. The ninth of Av is a day to feel that brokenness and to yearn for something higher, and to give our yearning up to God, until we experience a wholeness beyond the brokenness, or as Rebbe Nachman of Breslov says, “There is nothing more whole than a broken heart.” From there, we can begin to build.

May Hashem bless us to love for no reason and to build with the secret that comes from knowing what it feels like to be broken.